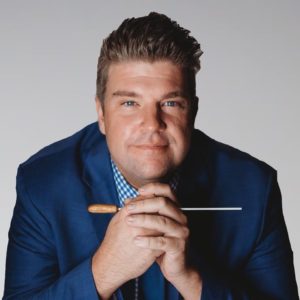 This interview features creative advice from Space Coast Symphony Artistic Director and Conductor Aaron Collins. To learn more about Aaron Collins and his collaboration with Michele Campanelli, visit this link.

What inspired you to choose music as a career path?

Collins: I got into music when I was really young, about nine or ten years old. My family is musical. My grandmother was an organist choir director. My grandfather built organs and did some work with The Lawrence Welk Show. My mom’s a school teacher. So, I had this musical upbringing that was influential in my career path. Later in my teenage years, I really knew that I wanted music to be a part of my life. I continued to pursue music throughout high school and college.

How did you become the conductor for the Space Coast Symphony?

Collins: I started conducting various groups in the local area. I conducted the Community Band of Brevard, Melbourne Community Orchestra, Melbourne Municipal Band, and Space Coast Oratorio Society. So, I was kind of ingrained here in the community. At one point, I was conducting the choir for the Space Coast Oratorio Society, and we needed an orchestra. So, we put together an orchestra and performed this massive piece put together musicians by my friends, students in school and, various community players. It was a huge success. Someone walked up to me and said, “that was a lot of fun; we should do that more often.” About a week later, we decided to start the Symphony Orchestra. It was kind of a spur of the moment decision. Over that summer, we created our name, logo, and all the things that go into creating a business. Four months later we performed our first concert with an orchestra of about 85 musicians and an audience of about 1,000 people. It was like a rush to get there, but when we did, it was awesome.

In your opinion, what makes the Space Coast Symphony unique?

Collins: We’re known as the symphony for everyone. We really try to attract people who have never been to a symphony concert before. Our target patron is someone who has never experienced a symphonic concert in their life. We have a huge variety of programs that separate us from others; we have Masterworks, pops, Broadway, movie music, jazz, rock, and children’s concerts. The wide variety of music we offer appeals to more than your traditional classic music audience member. We have the opportunity to allow anybody to attend a concert, regardless of their financial background. So, if they can’t afford a regularly priced ticket, they can go on our website or give us a call and attend the concert at no cost to them. We really want to grow the audience space for classical music, and we do it through these programs.

Where do you find inspiration to create?

Collins: I find my inspiration through my friends and my family mostly. I’ve got a huge group of talented friends. Being around my friends, seeing what they do, and working with them is inspiring for me. It inspires me to work harder.

Do you ever experience writer’s blocks? If so, how do you overcome it?

Collins: I used to before I was a conductor. I originally wrote music but then found conducting, and that just kind of took over my life. Composing music is very similar to writing where you get blocked, and you just don’t have any ideas. As a composer, I would just step away from the music, live my life, and then come back to it at different times when I felt creative. I would get on the piano and mash it until there were some ideas, but sometimes it’s a part of life. Sometimes there’s no immediate solutions, but you’ll find that fresh ideas will sprout when you take time and come back to something.

In general, what would you say are common misconceptions people have about conducting?

Collins: The biggest misconception is that the real work happens before the concert. Such as any rehearsing or preparing. Conducting is not just a person waving a stick in front of a group of people. There is a lot of work that goes in before the rehearsal.

What is the most rewarding aspect of being a conductor?

Collins: Collaborating with musicians. The most exciting aspect is making music with someone else. Even if you have a vision going into something and know how you want the piece to sound, new things pop up and become a part of your path when working with someone else. So, it’s very exciting to work with different people and gain additional insight.

What is the most challenging aspect of being a conductor?

Collins: Communication, and it goes both ways. If you’re not a good communicator or can’t communicate your ideas, then it’s all for not. So, you always have to figure out a way to be concise, without saying words, to really get musicians to respond to what you want. Time is always limited when you’re in rehearsal. You really have to be able to convey everything through your hands and face; you have to make sure you’re as emotive as possible. This allows you to get as much out of the musicians as possible.

Can you share more on your collaboration with Michele Campanelli in Musicians are Superheroes?

Collins: In Vero Beach, we were awarded a grant called the Impact 100 that allowed us to launch several programs geared toward young people. One of the programs is concerts for kids. The program is geared towards kindergarten to second graders and allows us to bus kids for a concert. With that, we needed a program to perform. Michele came to me and pitched an idea of doing a script and story for this concert. So, we thought that would be perfect. Michele has been a great friend of mine for many years. I thought it would be a perfect way to start the series. So, we just jumped in headfirst. She wrote the script and sent it to us. I made assessments and changes; we worked together. Ultimately, we were able to put it on paper and have a performance. We created this incredible animation to go along with it. The entire process was unique.

Can you share more about your collaboration with Michele Campanelli in Music at the Watering Hole?

Collins: Music at the Watering Hole was a book Michele wrote, and I had so much fun working with her on the last project. So, I thought we could just jump and do another story of hers. So, this concert will be kind of in a similar vein. It’s going to be a lot of music that centers around Africa and to animals in general.

What advice do you have for creative individuals who want to share their works with the world, but maybe aren’t sure how to start?

Collins: Contact as many people as you can and get your work to them. It’s always a challenge trying to get your foot in the door. When I was young, I would reach out to every composer, conductor, and musician. I’ve sent hundreds and hundreds of emails and letters reaching out and telling them how much I love their work and how much they inspire me. I also would propose that if there was an opportunity in the future, would I be able to work with them? Lo and behold, even though I sent thousands of letters, several of these people wrote back. It opened doors for me to do great things in my life. So, work hard, be aggressive, and don’t give up.