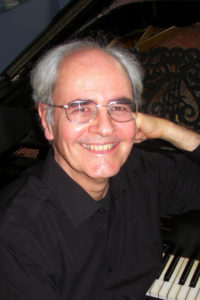 This interview features renowned composer, R. Michael Daugherty.  For more information on Michael and his music, visit his website here.

Who or what inspired you to take up composing, or pursue a career in music?

Michael: I want to say that I’ve always wanted a career in music. When I was very young, my parents had a good friend who played jazz piano and composed his own music. On Saturday nights he would sit at our upright piano and play for hours. I would sneak out of bed just to listen and even then I wanted to write music.
I was admitted to Denison University. The small classes and attention to detail by composer Elliot Borishansky helped me create my earliest extant pieces, and I have kept composing throughout my life. I’ve been at it now for over 50 years.

What have been the greatest challenges/frustrations of your career so far?

Michael: I took a job at Coastal Carolina Community College in Jacksonville, NC, in 1976. I headed a one-person department and often had a teaching load of 18-21 hours each week. It was a challenge, but I still found time to compose.  Luckily, North Carolina had a Visiting Artist program until the early 1990s, so I often had a musician as a one-year colleague. The challenge was to make each work meaningful in some way. This meant creating a work for a saxophonist that ran the gamut from jazz to the avant garde, a solo work for a percussionist that included 22 percussion instruments, a virtuoso work for a guitarist, a work including multiphonics for a clarinetist, a work including multiple mutes for a trumpeter, as well as song cycles for a soprano and later for a tenor.  These were wonderful challenges. I felt like Benjamin Britten who said composing music for films using only a handful of instruments was the best training he ever had. It has also kept me open to working in a variety of mediums.

What are the special challenges/pleasures of working with particular musicians, singers, ensembles and orchestras?

Michael: I’ve worked with several choral groups and orchestras over the years. One of the great pleasures of extended relationships is the opportunities it creates.  My first choral works were premiered by the college choirs at Denison University where I was an undergraduate. The conductor, William Osborne, was not only encouraging and helpful while I was still learning my craft, but he remains a champion of my music, having premiered over 20 of my works. I supplied choral works in Spanish and in Romanian for different European tours of the Denison Singers and composed a work used for the introduction of a new president at the university. In turn, I was graced by some wonderful performances.  Another extended relationship involves Hugh Partridge. I approached him with a piece for viola and piano during the intermission of a North Carolina Symphony concert in 1980. He was principal violist at the time and was amused by my temerity. It took several follow up calls before he actually looked at the piece. Luckily, he loved it and we premiered it at the opening of the fine arts building at the community college. This led to several performances together and a lasting friendship. Hugh was also the conductor of youth orchestras in the Raleigh area and a member of the symphony’s string quartet. This resulted in both commissions for the youth orchestra and performances of many of my chamber works. Recent collaboration with Aaron Collins and the Space Coast Symphony Orchestra have been quite rewarding. It started when I met Aaron soon after moving to Vero Beach. Serendipity: he was looking for a composer to work with a videographer for the Melbourne Film Festival. That led to performances in past seasons of a wind ensemble piece and a work for orchestra. Recently, I’ve had a performance of another band piece, Semper Fi, and my narrated fairy tales that led to a commission for three more. Finally, A Florida Story, celebrating early life in Vero Beach and narrated by poet Sean Sexton from letters by his grandfather, will be premiered in January, 2022.

How do you work?

Michael: There are many successful composers in the past who have worked rapidly with a seemingly stream-of-consciousness approach. Shostakovich often told young composers not to worry so much about how to write a new work, just get busy and compose it.  I am in this camp. I grab a musical idea and start composing. Yes, during the process I do think about form, moments of contrast, texture. etc., but the important part is getting into the process, putting the notes on the score. Admittedly, this often results in less complicated forms but not necessarily in less effective music.  As far as a daily routine, I start in the morning, break for exercise and again for lunch and finish somewhere between three and four in the afternoon. Once I start a piece, the time flies by.

What advice would you offer someone considering this career?

Michael: My advice: get help wherever you can and be sure to network with your mentors, performers, conductors, fellow composers, and any audience member that really likes your work. Life is full of surprises. Be friendly to everyone. Give help as often as you receive it.  Two other things, keep up your skills as a performer and work on composition every day.  Finally, keep trying. There are thousands of composers out there. One cannot expect to win every contest or appear on every program, but one can always be available when opportunity comes.

What do you usually start with when composing a new piece?

Michael: There is always music in my head. To get started, I sometimes listen to that music or, when pursuing a mood, get inspiration at the piano.

What are your main concerns when writing choral music? And how is that different from writing instrumental music?

Michael: In composing vocal and choral music, I am always concerned with what I think was the author’s intent. How do I capture the same mood? How can I enhance it? How much repetition should I use? Will the text be intelligible in my setting? I think all music requires these questions, and there is no great difference in the process.

How would you characterize your compositional language?

Michael: I always characterize my vocal music as text-driven, where the music enhances the meaning of the written word, and my instrumental music as striving for accessibility within the context of pantonal techniques. In other words, I want accessibility while maintaining high musical standards.