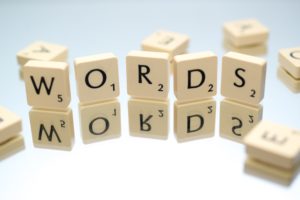 There is a measured difference between speaking and speaking eloquently; so, too, is the same difference to be found in writing.

While ‘eloquence’ is a subjective idea by which a piece of writing may be measured, there are several faux pas that beginning writers can and should avoid, the most important of which is word choice.

One might think that words are, obviously, the most important part of writing a piece, as they are the fundamental building blocks of writing itself; however, this blasé attitude towards word choice can often lead to under-editing with unintended shortcomings in one’s writings. Conversely, over-editing a piece can likewise render it dense and difficult to read.

With this dilemma in mind, how should one strive to write eloquently, with proper word choice, without overworking a piece?

The first step to working with word choice is to address one of the most common pitfalls for writers: word abuse.

While the term ‘word abuse’ can fall under a number of categories, there are two that are distinct in both their egregiousness, as well as their pervasiveness: the use of clichés, and the overuse of thesauri.

“It’s hard to see how some of our most cherished clichés ever got to be so popular, since they make so little sense,” Cross writes.

“The real problem with clichés is that stale words lead to stale ideas,” Cross explains. “Indeed, clichés are invisible, creeping fungi that feed on the human brain and turn it to rot. They do not perform the principal function of words, which is to communicate a thought, for they appeal to attitudes and expectations that are already formed.” (Cross, p.171, 179)

Clichés are an easy trap for writers to fall into, due to their familiarity and well-practiced use; they should be avoided if possible, however, in favor of either more descriptive language, or simply a re-wording of the sentence.

The overuse of a thesaurus may be even more prevalent than the use of clichés; while numerous writers are at least aware of the idea that one should not use clichés (if, indeed, unaware of why that is the case), few writing textbooks provide much detail on the ever-prevalent abuse of thesauri. At the same time, a Google search only a few moments away at any one time, the temptation for many is too great.

Vocabulary, it may be said, is not so much a decision as it is a product of one’s own repertoire of language—that is to say, while you should never be afraid to expand your personal vocabulary, and especially to try and use new vocabulary, it is vital that you work within your personal limits. It becomes painfully obvious when a writer is deliberately heavy-handed in their vocabulary, especially when the word is being used in the wrong sense.

For example, “the fledgling lad ambulated to the public recreation grounds” seems to be filled with high language; it actually obfuscates the true meaning. It would be better to simply state that, “the boy walked to the park.” Vocabulary should be used as a way to be both clear and concise.

Lastly, common faux pas extends to common mishaps in word choice, e.g., using ‘who’s’ for ‘whose,’ or ‘consist in’ for ‘consist of.’ For an excellent guide on these, read Torn Wings and Faux Pas by Karen Elizabeth Gordon.

When using details to write a description, there is an especially prevalent temptation to either browse the thesaurus for synonyms or to rely on clichés. This temptation should be avoided in favor of using one’s personal experience to provide a description; the use of sensory details especially supports this.

“Sensory details help readers imagine sounds, odors, tastes, and physical sensations in addition to sights,” reads the Norton Field Guide to Writing. “Whenever you describe something, you’ll select from many possible details you might use […] To focus your description, you’ll need to determine the kinds of details that are appropriate for your subject.” (Norton, p. 287)

Ultimately, how you use your words depends on personal preference—but beware, there is a fine line between writing well and writing mistakes, and that line is often drawn by word choice.